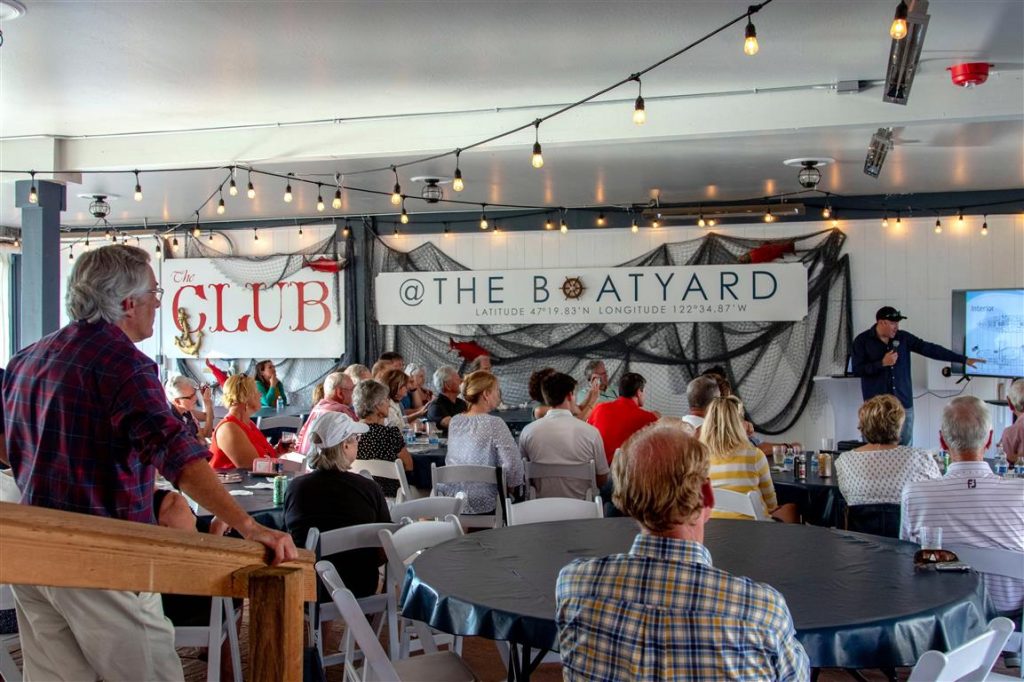 It’s been three years in the planning and now Jacob Adoram Hendrickson is about to set off on an adventure of a lifetime. The former Air Force pilot will push off in Neah Bay, Wash., on July 7 on his quest to row across the Pacific Ocean, not touching land again until he reaches Australia eight months later.

Hendrickson held a “meet and greet” fundraising event at the Club @ the Boatyard on June 19 and was welcomed by an enthusiastic gathering of people who had plenty of questions about his incredible journey. 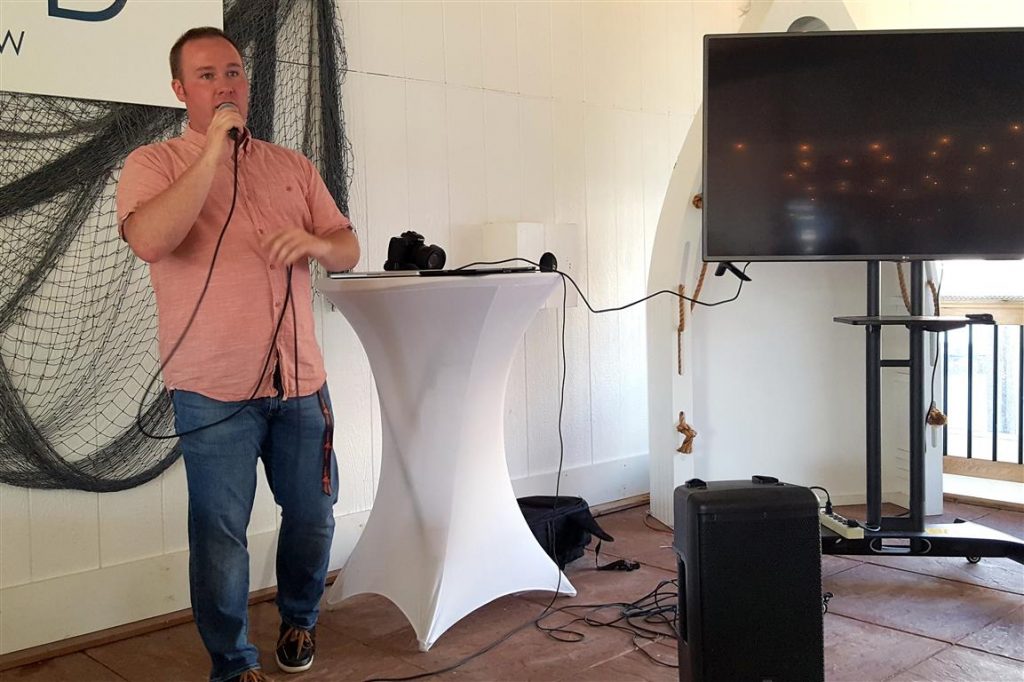 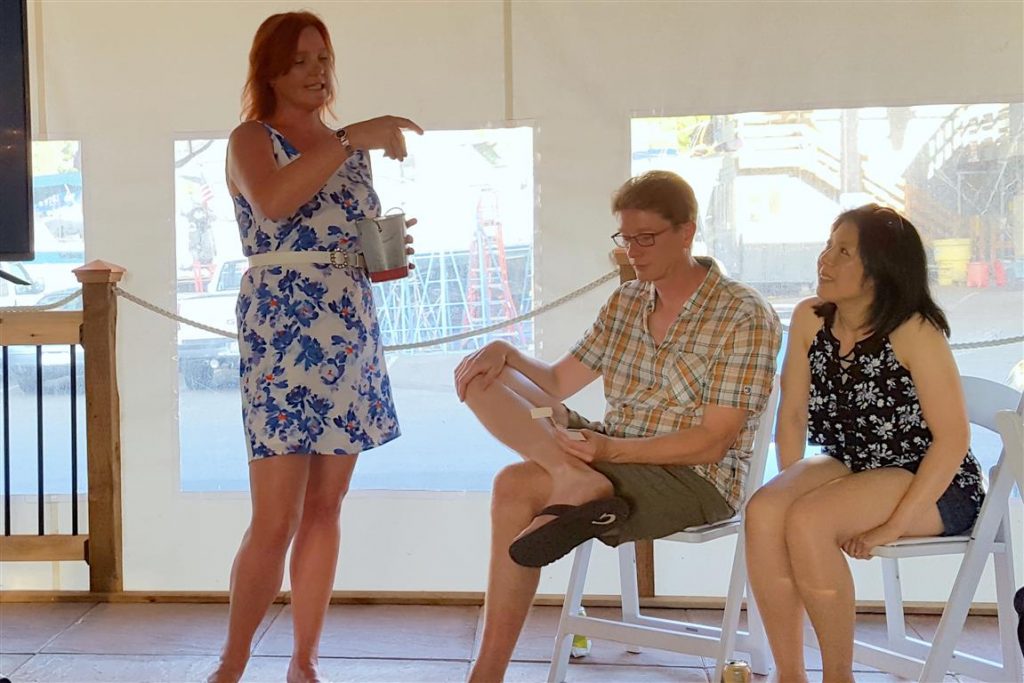 About 60 people came and enjoyed a pasta dinner by Joeseppi’s Italian Ristorante and The Trolley @ the Boatyard organized by Danielle Taylor (above, standing on the right), hospitality manager of Gig Harbor Marina & Boatyard. Chance Busey (above, left), assistant marketing director at the boatyard, served as emcee and got things rolling with introductions and prize giveaways.

Fundraising prizes included an appealing “boat load” of snacks donated by a supporter of Jacob’s quest, a boat haulout at Gig Harbor Marina & Boatyard, a one-night stay on the marina’s beautiful guest yacht, Suite Dreams, and fun boatyard store apparel and other merchandise.

Jacob Adoram Hendrickson is attempting to set a record for the first solo, unsupported and nonstop row across the Pacific Ocean. He is planning on his journey taking eight months, although his specially-built boat, Emerson, will be supplied with food for 10 months.

To take care of his clean drinking water needs Hendrickson is partnering with Water Mission, which works to build safe water solutions around the world.

Read more about Jacob and his journey and watch his video on his website.

The former Air Force pilot of A-10 fighter jets has spent years researching and planning his Pacific trek. A volunteer team of nutritionist students from Oregon State University helped him plan and package the food he will need on board to cover a possible 10 months at sea. Hendrickson is planning on consuming 6,500 calories daily to fuel the arduous activity of rowing at a rate of three knots. 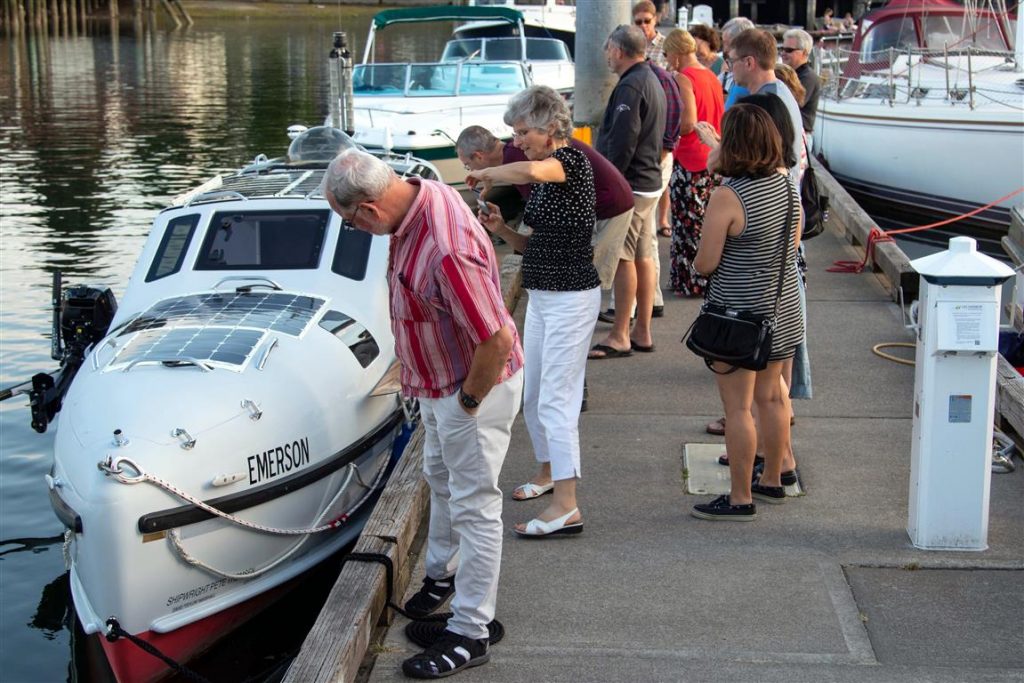 After Jacob’s presentation at The Club, attendees walked down to view Emerson in person at Jerisich public dock.

It took Schooner Creek Boatworks in Portland, Ore., two years to build the 28-foot carbon fiber boat, designed by naval architect Eric Spomberg in St. Augustine, Florida. It is equipped with communications equipment including a satellite phone and Wifi hotspot for email, and an iPod for music and audio book companionship.

Emerson has a large rudder, which helps it track through the water, Jacob explained; plus, it has an auto pilot helping control the rudder to stay on course.

Jacob sits in his sleeping quarters on Emerson.

Hendrickson plans on a routine of two hours of rowing and two hours of sleep. While sleeping he will “just drift,” he says, or he can put out a 12-foot diameter sea anchor, like a parachute, to stop him. He will also set up AIS alerts to notify other vessel traffic of his presence.

Jacob has a risk management plan that includes a team on shore tracking him and communicating with him on his progress across the Pacific Ocean, and a weather report service for notifying him with updates.

He expects temperatures during his journey to be similar to what is typical for a Gig Harbor summer. His route takes him south of Hawaii, coming within about 150 miles of the islands. When he crosses the equator he will continue into warm weather, so winter storms won’t come into play.

“There’s so much to learn it’s like being a kid again.” – Jacob Adoram Hendrickson

Attendees at The Club event were brimming with questions about Hendrickson’s extraordinary journey, and he was happy to answer them. He deftly handled many technical inquiries about his unique boat, as well as the psychological aspects of being several months at sea in solitude. 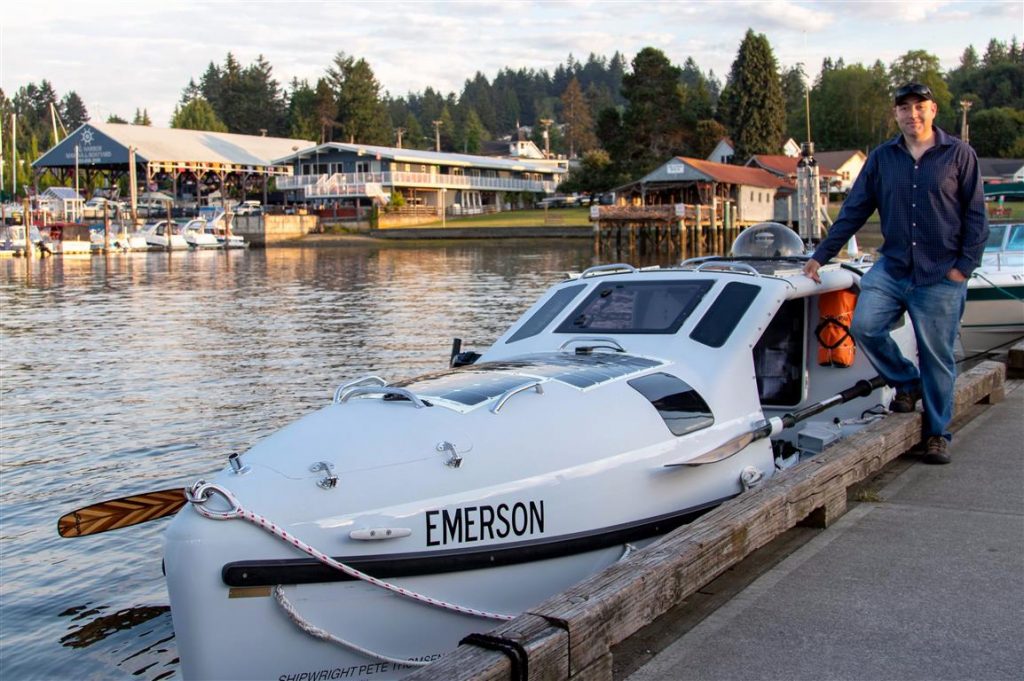 Jacob stands by Emerson after his presentation at The Club, seen at Gig Harbor Marina & Boatyard in the background.

“What is the most ominous part of this for you?” asked one man.

Jacob had his answer.

“The most ominous part is just getting away from the shore and not crashing back into the rocks,” he said. “Plus, adapting to this new lifestyle of isolation.”

And the most exciting part?

Be sure to follow this blog for updates on Jacob’s progress across the Pacific and information on how to contact him during his journey.