As the only marine haulout facility in town, Gig Harbor Marina & Boatyard answers many calls to duty. One of those calls recently was to assist Gig Harbor police with a sinking trawler in the harbor. 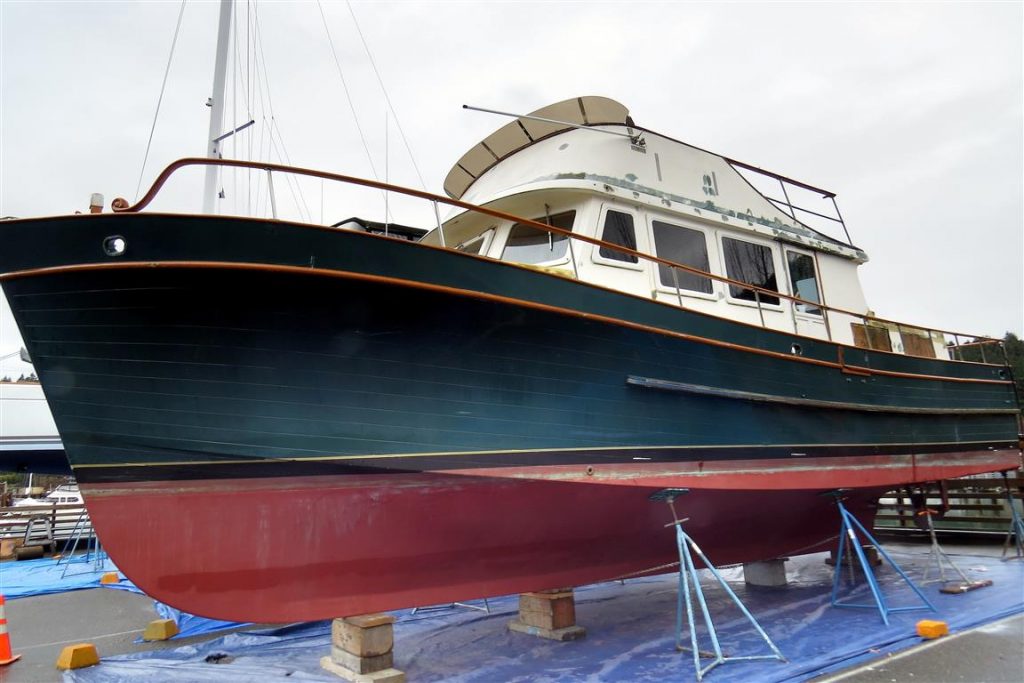 Gig Harbor Marina & Boatyard hauled out a classic trawler that was sinking in Gig Harbor. The boatyard readied the salvaged boat for transport to an auction yard.

“He had dreams of rebuilding the trawler,” said Mark Lindeman, boatyard manager at Gig Harbor Marina & Boatyard. “Then he got another boat so that dream got put on the back burner.”

Meanwhile, torrential rain settled in and filled the boat with enough water to put several disconnected through-hull fittings below the waterline — at which point the boat began sinking. So Gig Harbor police called the owner and then — who ya gonna call? — contacted the marina…naturally on a weekend when the boatyard crew was not on duty, and naturally when another boat was still sitting in the Travelift. 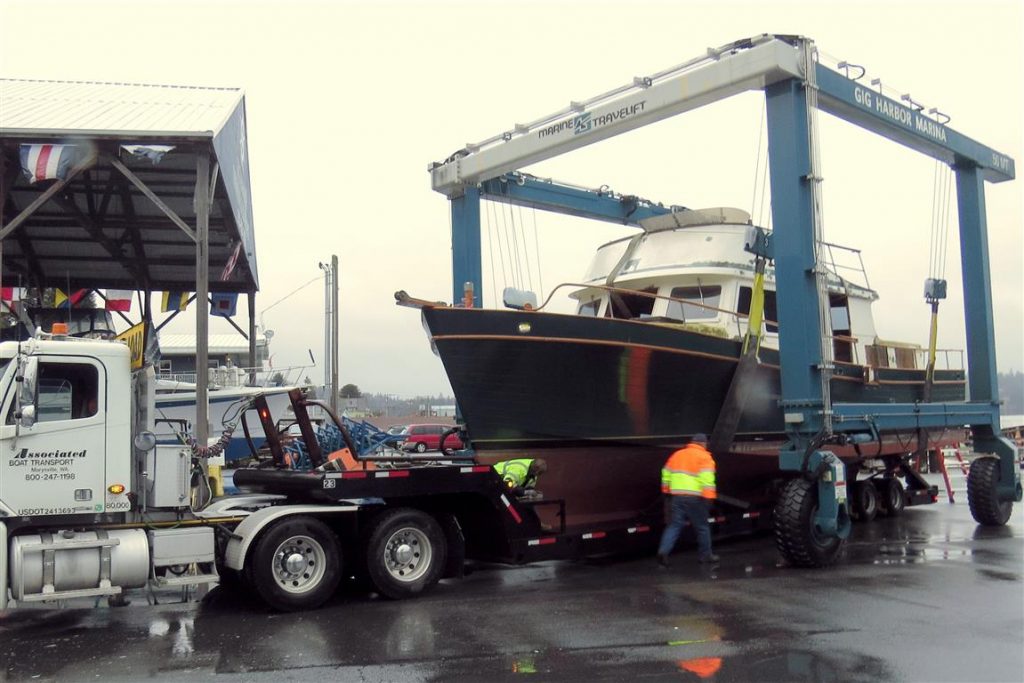 Crew members with Associated Boat Transport out of Marysville work to settle the salvaged sinking trawler onto their trailer after Travelift operator Mark Rybin sets it down.

But this call to duty couldn’t wait for business hours. The police towed the sinking trawler over to the marina, and the boatyard, in conjunction with the Gig Harbor Police Department, pumped the water out until the through-hulls were above the waterline and the boat could be hauled out.

Sadly, the classic old trawler was declared a total loss by the insurance company, so Gig Harbor Marina & Boatyard was pressed into service for the next phase of the operation: removing 500 gallons of diesel fuel from the disabled boat and sawing off the trawler’s cabin in preparation for overland transport.

Boatyard Assists with Salvage of Sinking Trawler in the Harbor 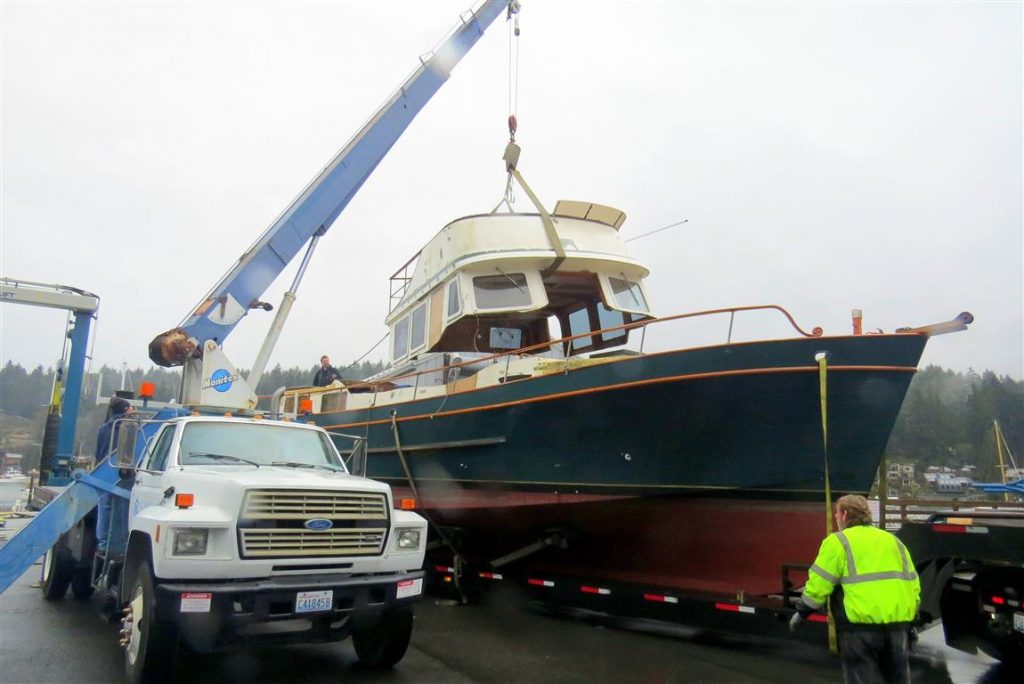 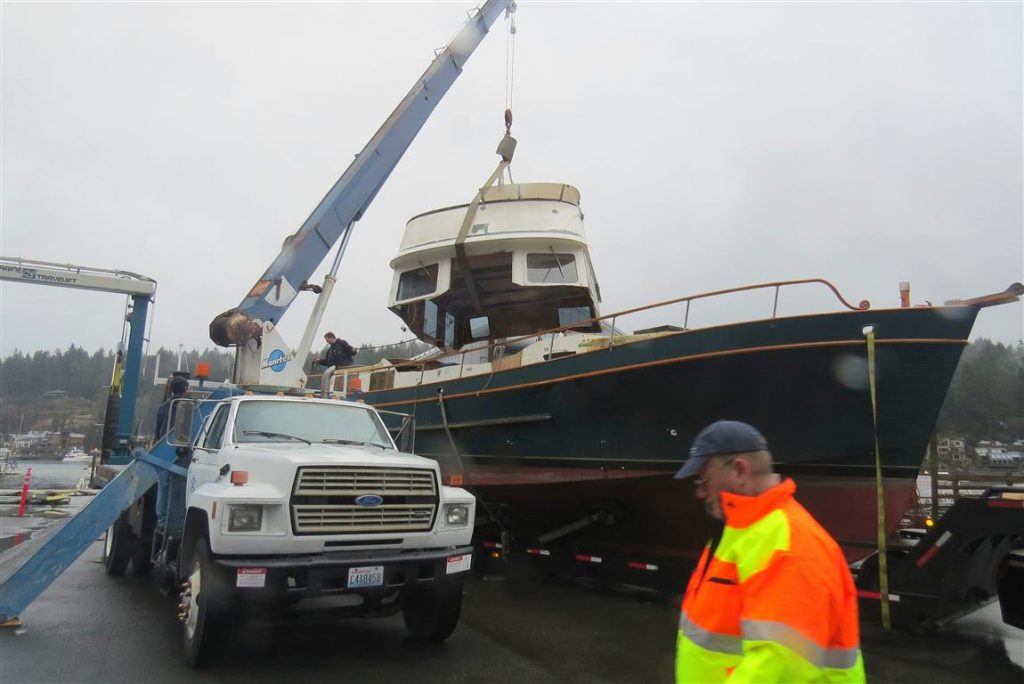 In both photos above, crane operator Mark Rybin of Gig Harbor Marina & Boatyard lifts the sawed-off cabin from the trawler that was partially sunken out in the harbor.

The trawler’s height, at about 18 feet, exceeded State of Washington highway regulations, which call for clearance maximums in the 14- to 16-foot range for bridges and overpasses. 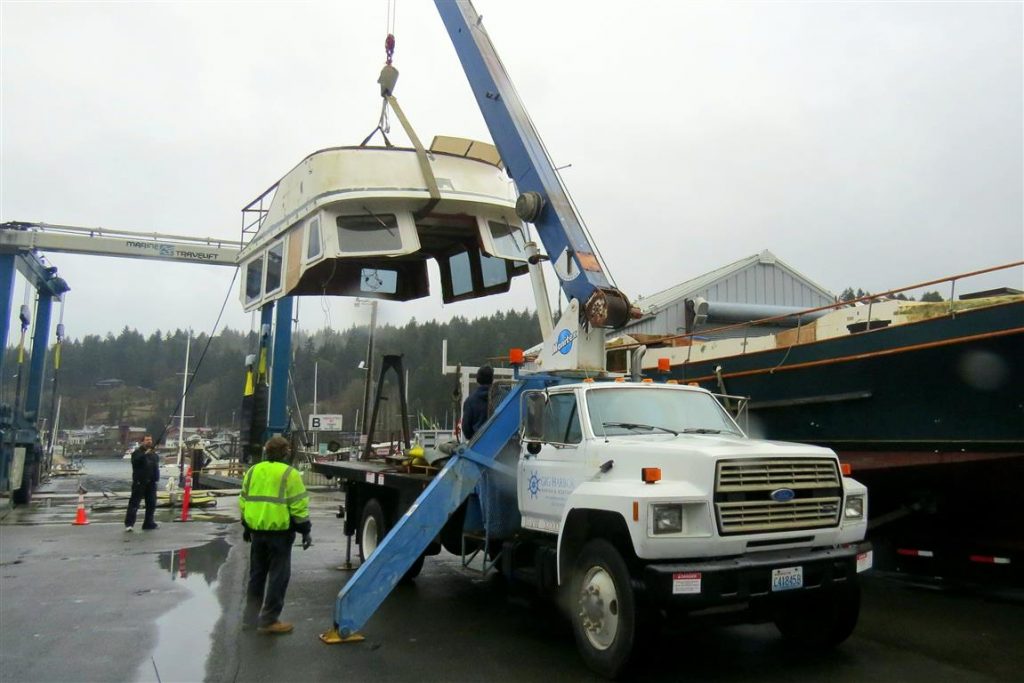 Shipwright John Iverson (in dark clothes in photos above and below) helps guide the trawler cabin into position for lowering onto the transport trailer. The salvaged trawler and cabin were taken overland to an auction yard in Sumner.

Shipwright John Iverson had the task of cutting the cabin off with a Sawzall, but it was not a job he enjoyed.

“It was sad,” he said, as he helped Travelift operator Mark Rybin settle the detached cabin onto the transport trailer. “This is a neat old boat.” 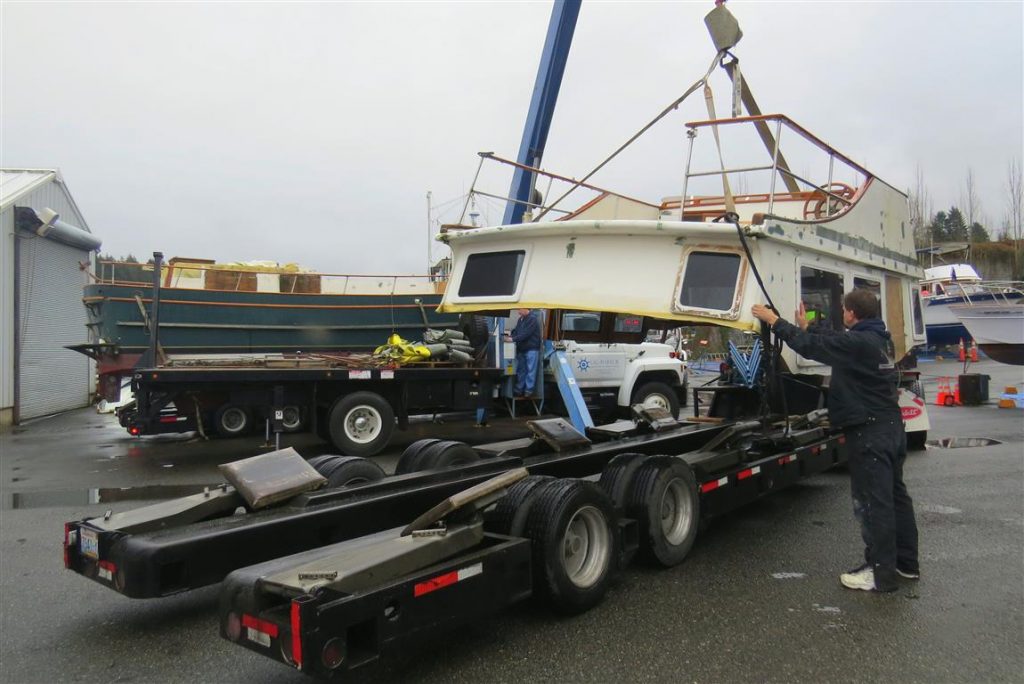 Rybin echoed that feeling as he helped Darren Gaudette and Alan Musselman of Associated Boat Transport load the boat and its cut-off cabin for transport to an auction yard in Sumner. 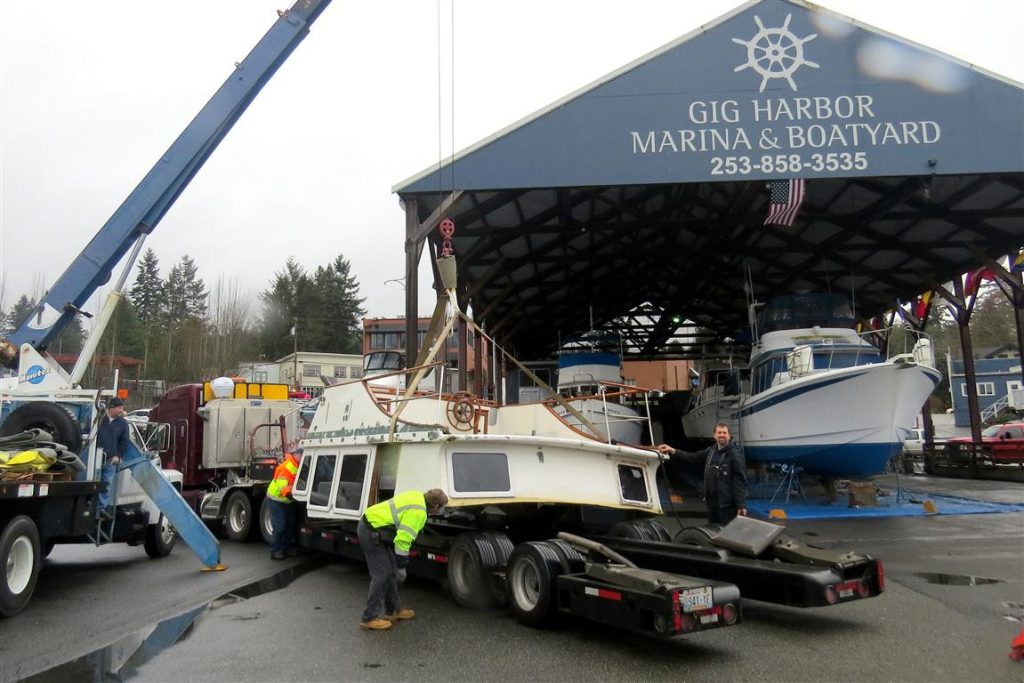 The 43-foot trawler, found sinking in Gig Harbor, and its detached cabin are readied for transport after being declared a total loss by the insurance company. Shipwright John Iverson, right, had the unpleasant task of cutting off the cabin for state highway height requirements.

“It’s kind of a sad demise for a boat,” said Rybin, looking across the boatyard where various boats sat on stands for service. “Because I love all the boats, you know.”

Gig Harbor Marina & Boatyard is the only full service boatyard and haulout facility in Gig Harbor. We are ready to answer the call of duty for any marine service and repair need.