It’s only fitting that our crew here at Gig Harbor Marina & Boatyard helped with a few pieces of harbor fishing boat history recently. After all, the parts from the historic Avalon, to be featured in an exhibit at the Harbor History Museum, originated right here on this property when the purse seiner was built at the Skansie Ship Building Company in 1929.

With the help of boatyard manager Hartwell Champagne and lift operator Mark Rybin, the nearly 90-year-old Avalon’s original wheelhouse, propeller and replica stack were moved into place at the museum earlier this month. 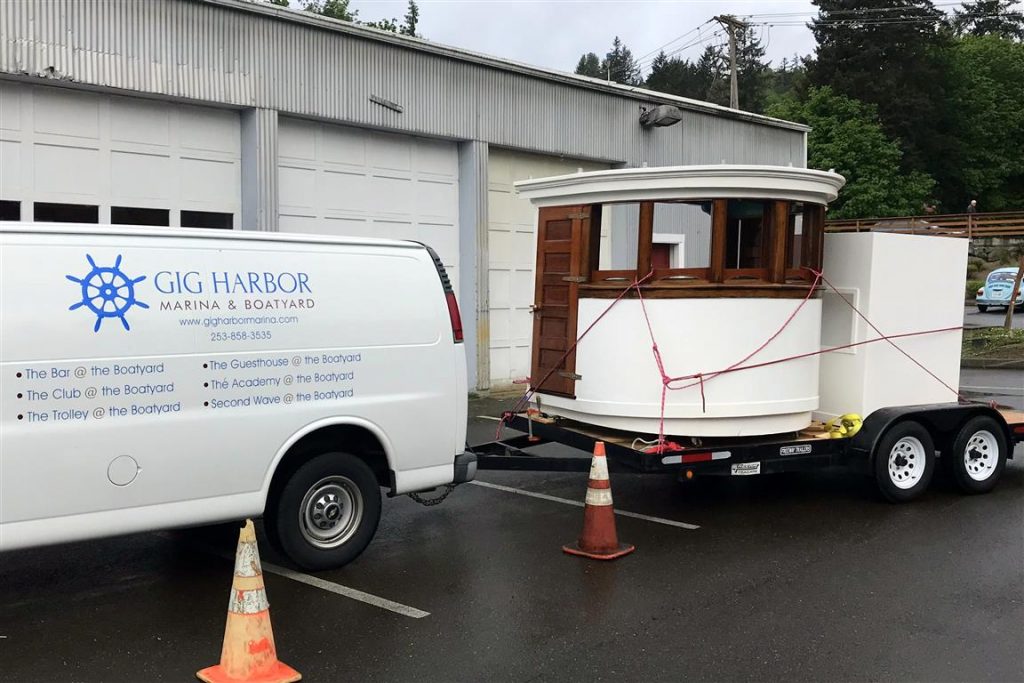 Crew from Gig Harbor Marina & Boatyard helped move parts of the historic seiner Avalon from the Gig Harbor BoatShop to the Harbor History Museum. In the top photo, Boatyard Manager Hartwell Champagne, right, and Guy Hoppen, left, president of the BoatShop, move the seiner’s original pilothouse into place at the museum.

With the use of the yard’s van, trailer and forklift, the boatyard team helped Guy Hoppen, president and founding director of the Gig Harbor BoatShop (which owns the salvaged parts of the old fishing boat) and other crew members move the pieces from the BoatShop to the museum for display.

The exhibit, titled “The Avalon Project: Salmon, Seiners & Life on the Sea,” will be on display at the Harbor History Museum from May 27 through Sept. 16, 2018 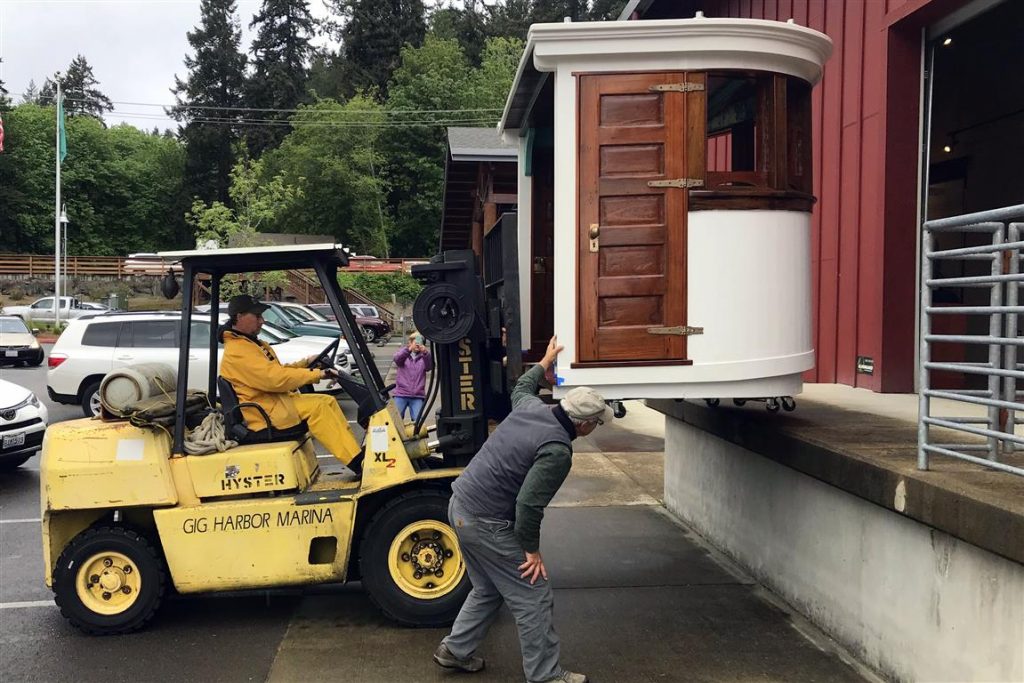 The centerpiece of the exhibit is Avalon’s iconic wheelhouse, which was salvaged and carefully restored at the BoatShop.

The exhibit also includes a brief history of Gig Harbor Marina & Boatyard’s predecessor, the Skansie Boat Building Company; a “story skiff,” a scaled-down version of a seine skiff that would have been used to set the net; a representation of a seine net with different species of salmon, and more.

Some Avalon history from the Gig Harbor BoatShop: 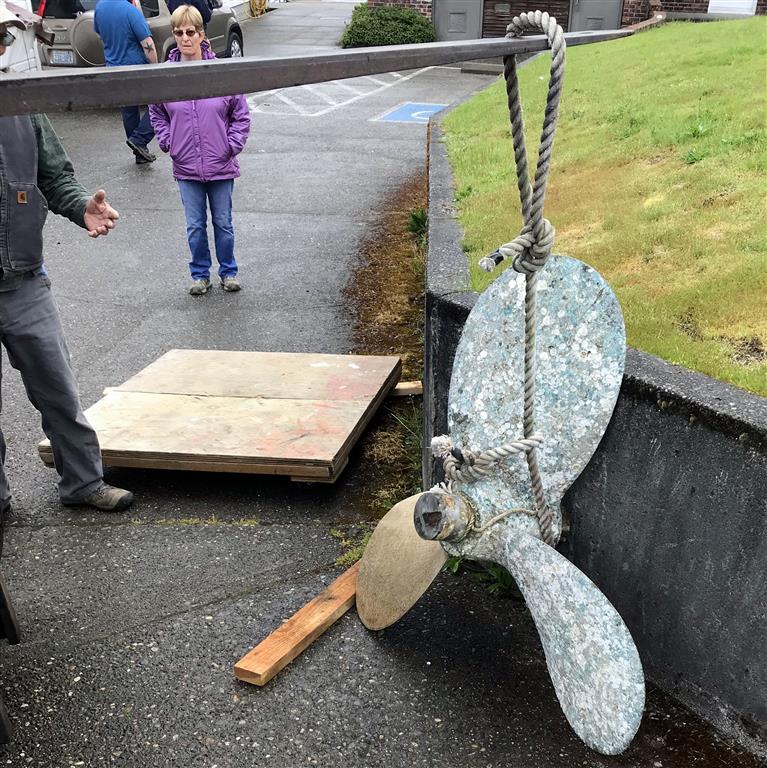 The purse seiner’s huge propeller will be part of the exhibit at the museum.

Avalon, constructed at Skansie Ship Building Company in 1929, is one of the most recognizable boats designed and built in the South Sound. In 2015, after many decades of commercial fishing, Avalon sank in Hood Canal.

Declared a derelict vessel, she was destined for demolition when Gig Harbor BoatShop and the Department of Natural Resources partnered to save her from the wrecking ball. Instead of being crushed, Avalon was thoughtfully deconstructed, which allowed the BoatShop to recover artifacts that will be featured in the exhibit, “Salmon, Seiners, & Life on the Sound.” 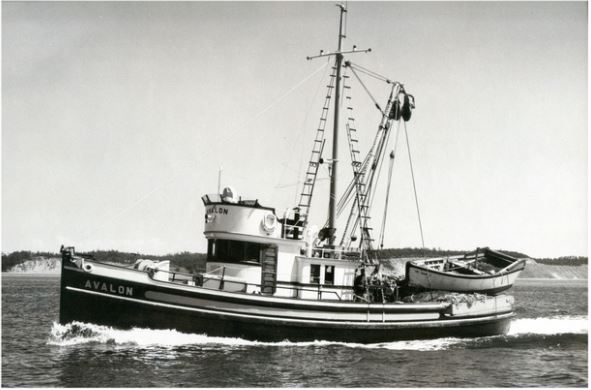 Dismantling Avalon piece by piece also allowed the BoatShop to develop accurate construction plans detailed enough to build a Skansie purse seiner — significant because there are no known plans for this vessel.

The 66-foot wooden purse seiner was one in a long line of the Skansie family’s boat-building tradition. It was first fished by Andrew Skansie, then later by his sons Antone and Vince Skansie. The Skansies fished the boat for more than six decades, traveling from Gig Harbor to the salmon fisheries along the Northwest coast.

The museum exhibit will not only feature the story of the Avalon as typical of many early purse seiners in the area, it will also explore the past and present of Puget Sound’s salmon fisheries and generations of fishing families and fishing towns along Northwest shores.

Moored for many years at the Skansie’s net shed, located in the center of town, the boat was a Gig Harbor icon along with other well-known seiners such as the Genius, Victory, Veteran, and Shenandoah.