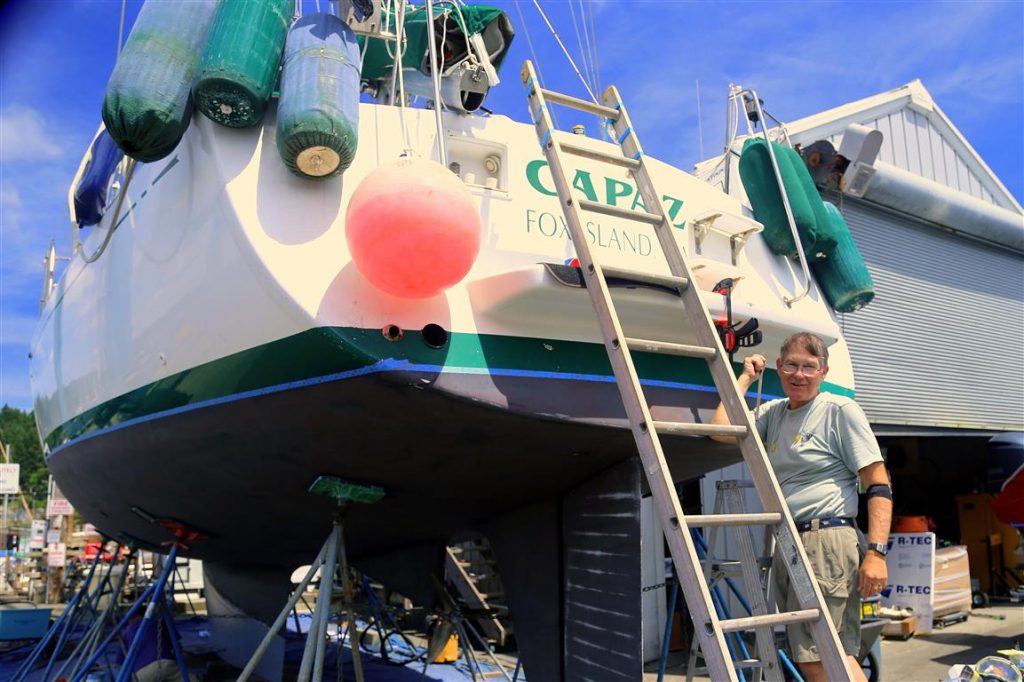 Capaz is sailing off to see the world next month. So she made her first port-of-call Gig Harbor Marina & Boatyard for service and prep before the long adventure in the Pacific.

The boatyard hauled the 48-foot custom Perry ketch for owners Mark Coil and his wife of Gig Harbor, to prepare the sailboat for an extended cruise to Mexico and beyond, reported boatyard manager Mark Lindeman.

See video of The Capaz Haulout by Thomas Bliss of the Northwest Maritime Academy.

“The owners are loyal and long-time customers of ours,” Lindeman said. “They’re planning to go to Mexico, then do the Pacific Loop to the Marquesas. So we’re doing all the prep work: sanding and painting the bottom with a high-copper ablative paint to work best in tropical waters and a new barrier coat on the keel. We’re doing the whole bottom.” 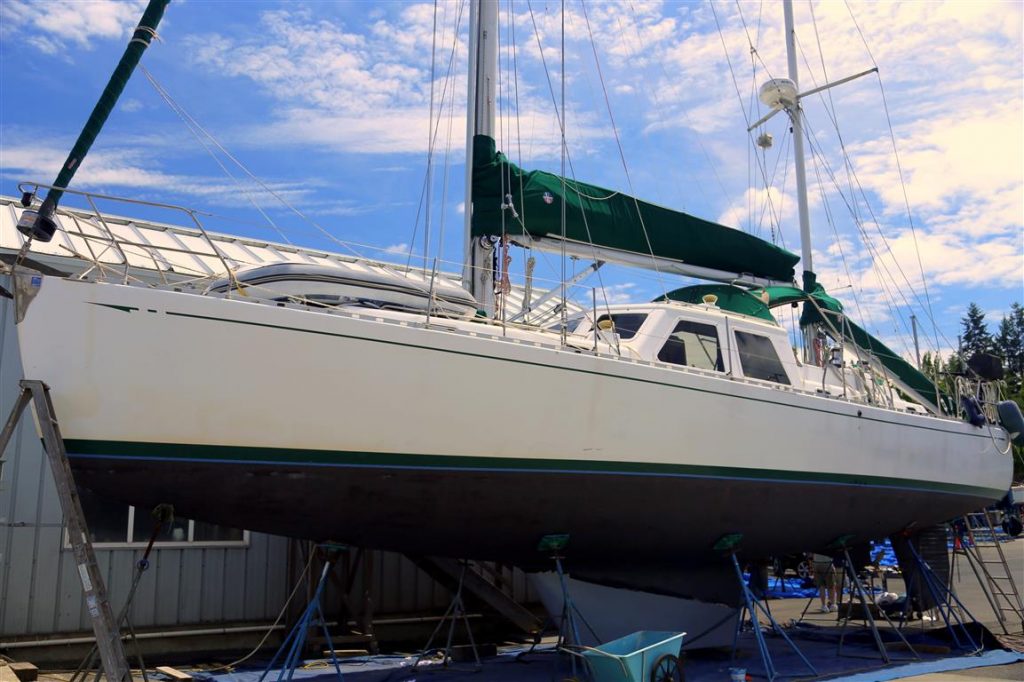 “Capaz” was on the hard at Gig Harbor Marina & Boatyard to be prepped for her lengthy cruise in the Pacific.

Coil, a captain with United Airlines, and his wife plan to set sail Aug. 22 and head down the Pacific coastline to Mexico. It’s a trip as much about the journey as it is the destination, with several leisurely stops along the way.

“We’ll hop down the coast to San Francisco, maybe spend a week there; then to Santa Barbara, and maybe a week or two there,” said Coil from a ladder at the stern of Capaz last week. “Then we’ll go down to San Diego.”

Coil, a longtime customer at Gig Harbor Marina & Boatyard, was at the boatyard nearly everyday seeing to all the prep being done on his boat, which he has owned for four years. He had plenty of projects of his own, too. The day I caught up with him he was installing a self-steering wind vane that will help keep the ketch on course. 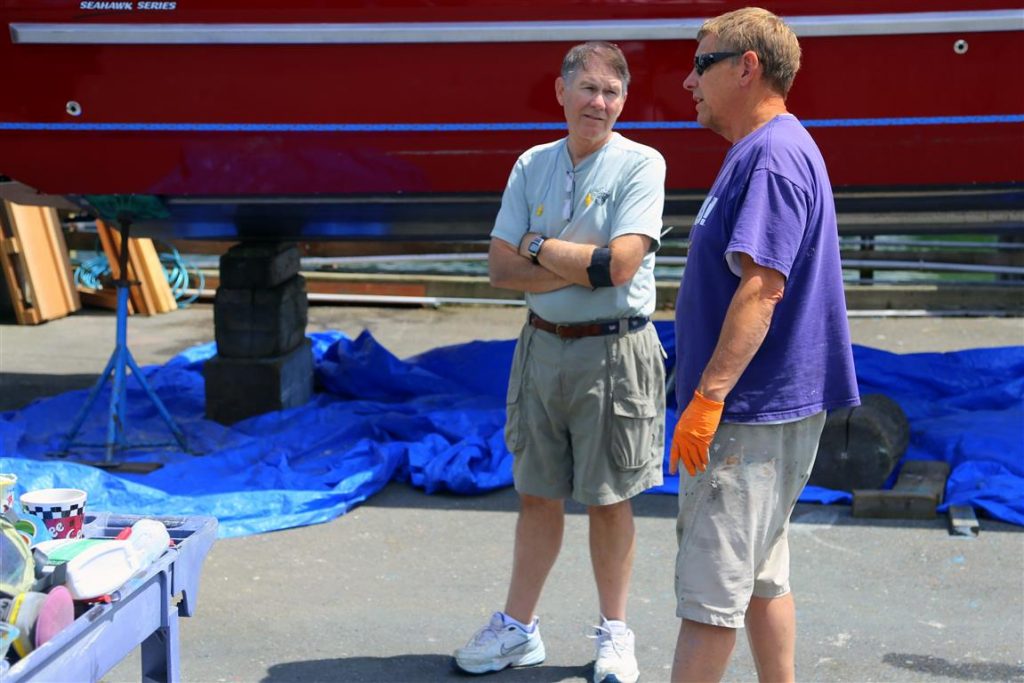 “I feel as though I live here,” he joked, referring to the huge undertaking of getting the sailboat ready for the long cruise. Then he got back to telling about his itinerary.

The Coils are entered in a rally that goes from San Diego to Cabo San Lucas, the “Baja Ha-ha Cruisers Rally.” The two-week rally leaves San Diego on Oct. 30 and ends at a beach party in Cabo on Nov. 12. The party marks the official end of hurricane season, Coil said. From Cabo, they plan to spend the winter in the Sea of Cortez, based in La Paz at the southern end of Baja.

“We’re just going until we get tired of it.” – Sailboat cruiser, Mark Coil

Capt. Coil has been around boats since he was four years old and learned to sail on the Willamette River in Portland. He and his wife moved to Fox Island from Santa Barbara in 1997, and then moved “off-island to the big city of Gig Harbor” a few years ago.

The Coils have done some of this cruise before, but this will be their first time on their own boat. They have friends coming in to help crew for a week or so at a time, plus, their 31-year-old son will be joining them in San Diego and staying with them for about six months.

Capaz, which means “able” or “capable” in Spanish, is a veteran to extended cruises. She took her previous owner, Brad Baker of Swiftsure Yachts, to the South Pacific and New Zealand three times. 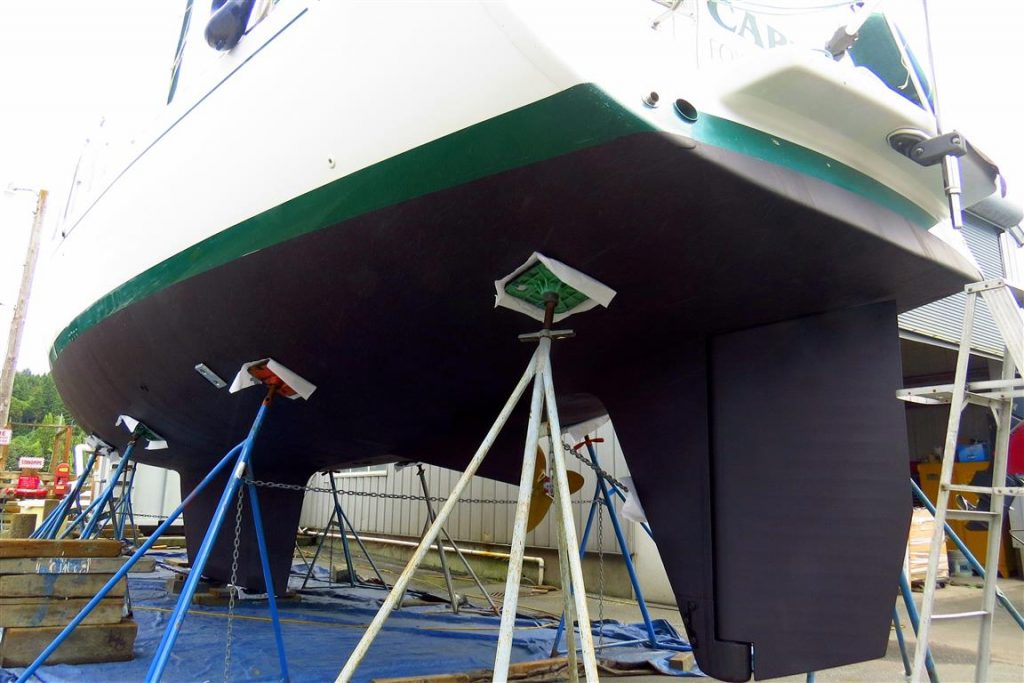 The 48-foot custom Perry ketch was prepped for her cruise with high-copper ablative bottom paint to serve her well in warm, tropical waters.

The capable ketch was launched on Monday after her service and prep work at Gig Harbor Marina & Boatyard. Now she is more “able” than ever for the adventure ahead — however long it is.

“We’re just going until we get tired of it,” said the captain.